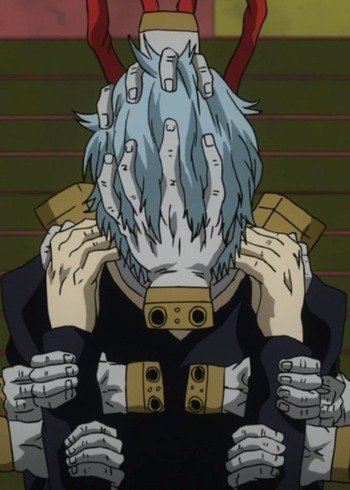 He can be quite a handful.
Advertisement:

Most viewers will wince when they see a wound inflicted on a sympathetic character, since physical injury is something all people can relate to. For similar reasons, a motif that involves a part of the body is a particularly visceral one.

Usually, using a body motif means constantly referring to the body part in question (those who have to stop and retrieve their minds from the gutter may do so now). This can be done through dialogue or by physically highlighting it, such as someone who's constantly wringing their hands or tapping their foot. A tattoo, scar, piercing, birthmark or mole on a certain part of the body is another way of drawing attention to it.

Like most motifs, the symbolism is normally dependent on the associations most people have with that particular part.

Of course, if the body part in question has been separated from the rest of the person it belongs to, it's a given that there's a Poetic Serial Killer around. Giving some thought to which part of the body he uses as a "trophy" is usually a clue to his motives.