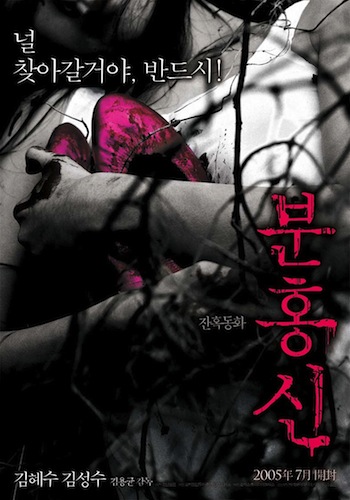 The Red Shoes (Hangul: 분홍신, Revised Romanization Bunhongshin) is a 2005 horror film written and directed by Kim Yong-gyun. Kim Yong-gyun was inspired by the fairy tale of the same name by Hans Christian Andersen, where a vain stepdaughter could not stop dancing in her enchanted red shoes.

Set in Seoul, Sun-jae leaves her unfaithful husband and moves into an old apartment with her daughter, Tae-su. One night when Sun-jae is returning home, she finds a pair of red shoes in a subway car and takes them home, only to discover that they are cursed. Her obsession grows, arousing envy and greed with mysterious, nightmarish visions. Even Sun-jae’s daughter and one of her friends, Kim-mi Hee, fall victim to the power of the shoes, resulting in hysteria and theft of the shoes.

With help from her new boyfriend In-cheol, Sun-jae tries to discover the mystery behind the red shoes before it gets her and her daughter killed.