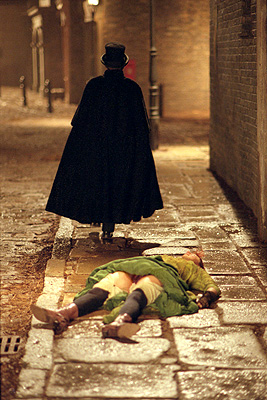 Yours truly, Jack the Ripper...
"Dear Boss: I am down on whores and I shant quit ripping them till I do get buckled... My knife's so nice and sharp I want to get to work right away if I get a chance."
— "Dear Boss" letter
Advertisement:

One of the first, and likely still most famous serial killers. Not just a serial killer: THE Serial Killer. The failure to conclusively discover the Ripper's identity has made a large contribution to the case's fame, and it is one of the main Stock Unsolved Mysteries used in fiction.

The Ripper is commonly held to have killed at least five prostitutes in the Whitechapel area of London's East End during the fall of 1888 - although it's worth mentioning that far less well known serial killers have reached far more impressive numbers and what made the Ripper's fame was the media coverage and panic among the citizenry:

However, there is some controversy concerning the actual total, with some investigators including other prostitute murders performed in a broadly similar fashion before and after the 'canonical' five. In addition, there is (and will likely always be) a lack of consensus in the case of Elizabeth Stride, the only canonical victim to show no signs of postmortem mutilation. All five of the canonical victims died with their throats cut, and all but Stride were heavily mutilated; this, combined with a witness report and the fact that Stride's body was still warm when police arrived, led investigators to assume that in Stride's case the killer was interrupted, leading to the attack on Eddowes later the same night (what has come to be known as the "Double Event").

From the complex nature of the mutilations, involving relatively quick and neat removal of specific organs, it is probable that the killer had at least some knowledge of anatomy — as would a doctor, butcher or (in the theories involving royalty) a keen hunter. Unlike the other victims, Mary Kelly was killed indoors, safely away from any prying eyes, and thus, the mutilations to her body were considerably more severe than the others.note  Here's

The murder and mutilation of prostitutes cut almost straight to the heart of Victorian morbidity, causing a wave of panic in London. This was exacerbated by a series of taunting letters to the Central News Agency and the Whitechapel Vigilance Committee between the "Double Event" and Mary Kelly's death. One of these letters purported to include half of Catherine Eddowes' missing kidney -"Tother piece I fried and ate it was very nise". All except this last are now usually considered to be hoaxes perpetrated by the reporters themselves, including the one in which the Ripper received his famous name. (The other letters show a much higher degree of literacy and spelling ability than the Eddowes kidney letter. Additionally, the half-kidney was ravaged with Bright's disease, consistent with Eddowes' known poor state of health.)

Besides these communications, the only clue the killer left behind was found on the night of the "Double Event", consisting of some bloody pieces of Eddowes' apron found in an alleyway; it is theorised that they were thrown there after the murderer used them to wipe his hands. A chalk inscription above the apron pieces, "The Juwesnote  Most likely a misspelling of "Jews", however three characters from Masonic lore, Jubela, Jubelo, and Jubelum, are also said to be collectively known as the "Juwes"; this has led to any number of theories that the Freemasons were involved in the killings in some way are the men who will not be blamed for nothing", was also assumed to have been written by the killer for reasons unknown. However the inscription was cleaned away before it could be properly recorded, due to fears that it would incite the populace, and given the general anti-Semitism of the times it cannot be definitively established whether the phrase refers specifically to the Ripper murders.

Things became even more complicated when the killings (probably) stopped after Mary Kelly's death, and the case went more or less cold. Although as noted a few similar murders briefly revived fears for some years thereafter, it was and is widely believed that the killer's growing psychosis reached full expression with the Kelly murder, after which s/he either committed suicide, died naturally or was arrested or committed for other reasons.

The suspects named then and since represent an extraordinary cross-section of society of the time, ranging from a homeless Jewish butcher to various middle-class medical students to the second-in-line to the throne. The theory that the killer was a woman, a vengeful/insane midwife dressed as a man, has also been bandied about from time to time. Another popular notion has it that the killer had been infected with syphilis — a venereal disease that causes progressive brain damage in its last stages — and was out for revenge. Another (the basis for most of the Royal theories) held that the five victims were bound by knowledge of a highly sensitive secret harboured by one, probably Kelly, and killed by Mysterious Government Agents to keep them from talking.

Chief Inspector Frederick Abberline, the distinguished DI in charge of the case, apparently pinned his colours on George Chapman, a Polish immigrant barber-surgeon who killed three wives in succession; when Chapman was convicted, Abberline sent the officers a telegram reading "You've got the Ripper at last!" However, Chapman's known MO was poison, not the knife, and while it is not unknown for serial killers to change their MO, it is virtually unheard of to go from a rage-driven knife murder to the more distanced act of poisoning.

More recently, there has been some speculation that the Ripper was American, based on a similar contemporary murder in New York and the coincidence of the chief suspect in that case having spent some time in England. Another theory — advanced by crime writer Patricia Cornwell — points the finger at the painter Walter Sickert, whose works show a distinct fascination with low Victorian life, as either directly responsible for the killings or aiding in the Royal cover-up. Cornwell's theory is almost universally mocked by serious Ripperologists as a case of deciding the culprit before examining the evidence.

, sponsored by British author Russell Edwards. This appears to implicate longtime leading suspect Aaron Kosminski, another Polish immigrant barber who ended his life in an insane asylum and who certainly fits the criteria well. However, as might be guessed, the provenance of both the shawl (which doesn't appear on the official list of Eddowes' effects, but was handled by at least two of her descendants prior to testing) and the test results themselves are hotly disputed. It has further been pointed out that given Eddowes' history of casual prostitution, singling out any specific man based solely on contact with her must be considered a dicey proposition at best.

The name "Jack the Ripper" influenced the nicknames of a lot of later killers, especially Peter Sutcliffe, the "Yorkshire Ripper". Originally he was given other names, including "Leather Apron" and "Mr. Hyde," but Jack's the one that stuck.

The Ripper case is particularly tantalizing for writers who want to make An Aesop or Historical In-Joke about Victorian London, as the case was never solved and much of the documentary evidence associated with it has been either lost or destroyed. It is also fairly common in stories whose pitches involve the phrase "Very Loosely Based on a True Story". As a testament to his infamy, Jack the Ripper was voted the worst Briton of all time by the BBC.

It has also attracted a reasonable number of dedicated students

called "Ripperologists" and also a fair number of guided walks in the East End on the subject.note One pub

in the area has a prominent sign at the bar that reads, "Your Tour Guide Is Lying To You" as a Take That! to the often sensationalised nature of these tours.

Jack the Ripoff, while a pun on this guy, is a trope about copycat killers in general — though, yes, some of them are copies of Jack.

The following works feature appearances by or references to the Ripper case.