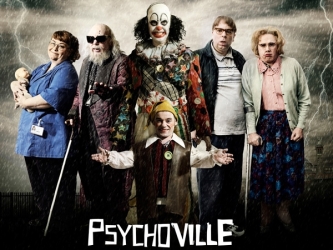 Psychoville is a British series from the two of the four creators of The League of Gentlemen, and it shows. The plot focuses on a variety of bizarre characters receiving a letter from a mysterious man in black, each reading I know what you did, a message (delivered in different ways) that said You killed her, a video of most of the characters performing "Close Every Door" from Joseph and the Amazing Technicolor Dreamcoat and a key that seems to be to the institution they all attended.
Advertisement:

The blackmailees (and main characters of the first series) are:

Other characters introduced in the Halloween special and second series include:

The show concluded after only two series, but the Sowerbutts (and Mr Jelly) were revived for the Inside No. 9 episode "Death Be Not Proud", which served as a fully absorbed Grand Finale to the series.