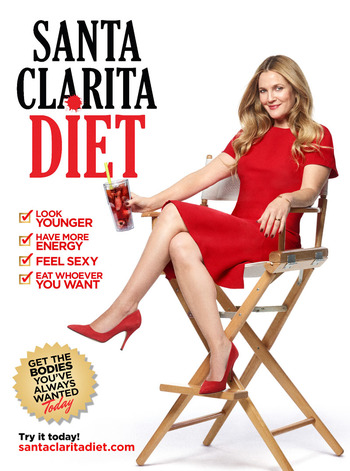 Santa Clarita Diet is a 2017 horror-comedy from Victor Fresco (Better Off Ted), airing on Netflix.

Sheila (Drew Barrymore) and Joel (Timothy Olyphant) are, by all measures, a happy couple and solid realtors, selling houses in the LA suburb of Santa Clarita. They have their small troubles, but their relationship is strong, and they're good parents to their daughter, Abby. And then Sheila vomits during a showing. She vomits a lot. After recovering from her brief illness, Sheila notes some changes. She has no heartbeat. Her blood is clotted. And she has a taste for raw meat. She doesn't want to use the word "zombie," but...

Strangely, Sheila's fine with her undead state. It's pulled the cork on her repression, and she feels absolutely uninhibited, willing to live it up, make impulse purchases, and party like a rockstar.

Unfortunately, that also means there's not much of a barrier when she wants to chow down on flesh. And eventually, the flesh of animals stops doing it for her. Joel, Sheila, and Abby are going to make this work, though. No matter how many people need to die...

Ran for three seasons before being cancelled by Netflix in 2019.