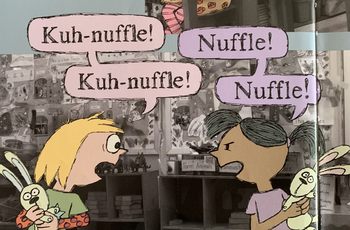 Many words have multiple accepted (or one accepted and one less accepted, but common) way of pronouncing them. Usually, these differences vary across geographical regions and not from person to person, hence you'll usually only hear one pronunciation being used, but cross over to a different region and you might encounter characters who have their own varied pronunciation for a certain word.

The general consensus is that if you encounter somebody say "tomahto" rather than "tomayto" (or vice versa) it is considered rude to point it out, but in fiction for some reason people tend to like commenting, possibly due to the Funny Foreigner trope.

Of course, as mentioned above certain words have alternate forms that are considered mispronunciations, such as "nucular" for nuclear. In this case, this trope can be used to identify a character as having Delusions of Eloquence, or to contrast Slobs vs. Snobs.

A variation can occur where the trope name is mentioned to indicate two different things seeming almost the same, though often used for laughs, for instance in "Blackmail" Is Such an Ugly Word.

Not to be confused with Pretentious Pronunciation, where somebody pronounces something in an uncommon (or even never-before) way in order to make the word sound fancier. Occasionally overlaps with Pronouncing My Name for You, if the speaker clarifies that multiple pronunciations is acceptable. May result in Got Me Doing It.

Gus and Eddy find that everything is turning into crayons, and they pause to debate how the word is pronounced.

Gus and Eddy find that everything is turning into crayons, and they pause to debate how the word is pronounced.