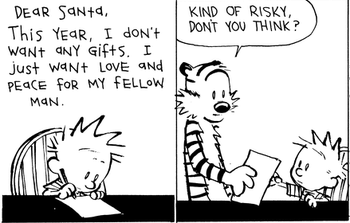 Ask for a nuclear missile, that'll work!
Andy: I think it's wonderful that you want to spend more time with your family even though it means letting 25 years of experience and hard work in the corporate world go to waste while we eat up our savings. I'm behind you 100 percent.
Roger: Thanks, sweetie. Now I know it was the right decision.
Andy: [thinking] Boy, when reverse psychology backfires, it really backfires.
— FoxTrot
Advertisement:

A character tries Reverse Psychology on another. Unfortunately, the subject is either smart enough to see through the laughably blunt ruse, or Too Dumb to Fool. Either way, the subject does just what the would-be psychologist didn't want them to do - and on their own request too.

(Please do not use this for examples where Reverse Psychology simply does not work. Or rather, do use it for them. Or... Oh, forget it.)