Series / Get Some In! 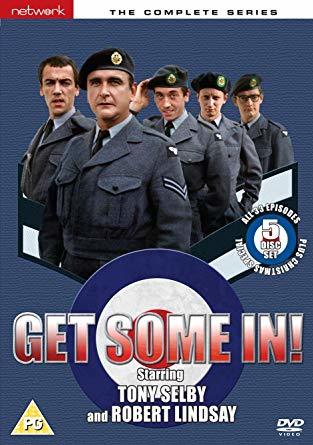 Get Some In! was a British sitcom written by John Esmonde and Bob Larbey (best known as the writers of The Good Life) which aired on Thames Television for five series between 1975 and 1978. It followed the trials and tribulations of a group of Royal Air Force National Service recruits in 1955 (between 1949 and 1960, all healthy males between the ages of 17 and 21 were required to serve in the British military for two years), and starred Tony Selby as Corporal Percy Marsh, the RAF's version of a Drill Sergeant Nasty. The recruits included snarky Teddy Boy Jakey Smith (Robert Lindsay), well-spoken grammar school graduate Ken Richardson (David Janson), naive vicar's son Matthew Lilley (Gerard Ryder), and pessimistic Scot Bruce Leckie (Brian Pettifer). Most episodes also featured scenes of Marsh's Awful Wedded Life with his long-suffering wife Alice (Lori Wells).

In the first two series, they went through basic training at the fictional RAF Skelton somewhere in the West Country; at the beginning of the third series, they were assigned to a nursing training course (along with Marsh, who had requested a transfer) at the fictional RAF Midham in Lancashire, where they remained until the end of the fourth series. In an ostensible Grand Finale, the four National Servicemen were posted to the non-fictional RAF Luqa in Malta, while Marsh was demoted to Aircraftman First Class for cheating on the final nursing exam and posted to Labrador, and that seemed to be that for the series.

However, the News of the World, citing audience figures of over 14 million, successfully petitioned Thames to uncancel the series, and the fifth series saw the four National Servicemen (with Jakey now played by Karl Howman, Robert Lindsay having departed to take the lead role in Citizen Smith) recalled to Britain and posted to the fictional RAF Druidswater in the west of England, where they once again crossed paths with Marsh, who had apparently risked his life in trying to save that of a superior officer and returned to Britain as a hero and a Corporal once again. Viewing figures plummeted, and the series was cancelled for a second and final time without a definite resolution.

The series stood apart from the various other Armed Farces series on British radio and television (such as The Army Game, The Navy Lark, Dad's Army, etc.) by being set in the Royal Air Force. However, the main characters hardly ever even saw an aeroplane, and only once actually went up in one, true to the experiences of many National Servicemen who joined the RAF in the hopes of taking to the skies only to be bitterly disappointed.