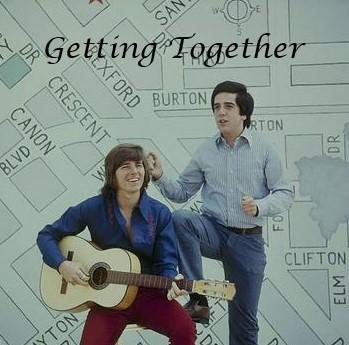 Getting Together is an American sitcom spun off from the Partridge Family episode "A Knight in Shining Armor" that ran for fourteen episodes on ABC in 1971 and early 1972. Composer/singer Bobby Conway (Bobby Sherman) and tone-deaf poet Lionel Poindexter (Wes Stern) are a songwriting duo trying to make it in Los Angeles. They live in an antique shop with Bobby's twelve-year-old sister Jennifer (Susan Neher). Other characters include their landlady Rita Simon (Pat Carroll) and her boyfriend, Officer Rudy Colcheck (Jack Burns).

Getting Together contains examples of: