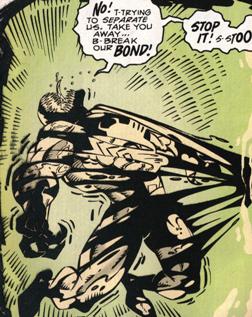 A costumed character cannot remove their costume, or an ordinary character cannot remove their clothes. Maybe a Freak Lab Accident has fused it to his body, maybe it's the only thing keeping them alive, or the only thing keeping those around them alive, or maybe it's a cursed Artifact of Doom. Whatever the reason, they have to wear it (or a substantial part of it) all the time; removing it is either very debilitating, very dangerous, or simply impossible.

For long-running series, finding a way to remove the costume may constitute a Story Arc, and actually doing so can provide an excuse to update a character's appearance. For some characters, this is a convenient source of Angst. Some works may address problems with (or make jokes about) waste disposal or other biological needs. This is also a fetish for some people, especially those with a forced chastity fetish.

This trope is found in many traditional RPGs in the form of "cursed" equipment and weapons. Typically these items will be noticeably more powerful than equivalent gear found at that point in the game, but will almost always come at the price of having a really nasty side-effect (such as being randomly stunned or damaging yourself while fighting). Trying to unequip the item under normal circumstances WILL invoke this trope, greeting you with an ominous message about you being unable to remove it. Legitimately removing clingy costumes would usually require a special spell, item, or a paid service from an NPC to do so - sometimes at the expense of that item.

When the item is smaller than an article of clothing, then it's a Clingy MacGuffin. The Heroic Host likely can't remove the costume because it's alive and bonded with him.