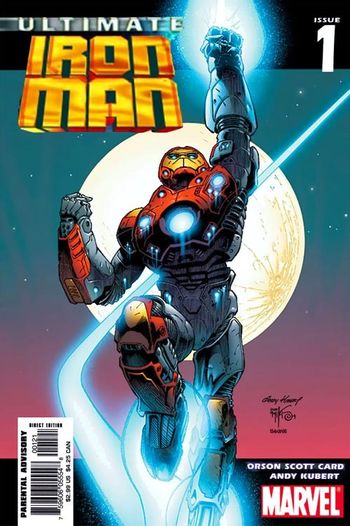 Ultimate Iron Man was a pair of Ultimate Marvel series written by Orson Scott Card and drawn by Andy Kubert (Volume 1) and Pasqual Ferry (Volume 2) that was intended to reveal the origins of that universe's version of Tony Stark. In this version, Howard Stark and his beloved wife Maria are brilliant scientists who are working on such ambitious projects as creating a suit of shock-absorbing bacterial armor and figuring out how to induce limb regeneration. After an accident exposes a pregnant Maria to the limb-regeneration formula, her baby is altered, causing neural tissue to develop all throughout his body. And thus is born Tony Stark, a boy with literally more brains in his little finger than any other human being who suffers from constant, agonizing pain that requires him to be covered in bacterial armor. Meanwhile, Maria dies and Howard finds himself forced to protect his new son from the machinations of his vicious rival, Zebediah Stane, who will stop at nothing to learn the secrets of Stark's bacterial armor.
Advertisement:

The two mini-series were later written out of continuity by Mark Millar, who explained that they were actually an in-universe anime series inspired by the version of Iron Man that appeared in his The Ultimates series.