Straight to the Pointe 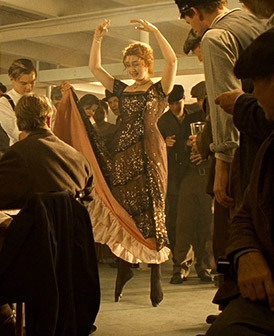 Dancing en pointe, i.e. on the tips of the toes wearing the specific shoes, is one of the basics of ballet, so a lot of fictional depictions of ballet will include pointe work; thanks to the Coconut Effect, if someone's en pointe, tutus aren't necessary to get the pointe across. Bonus points if pirouettes and ballet jumps (e.g. jetes, sautes, sissones, brises, and sobresauts) are also included in the performance, and especially if the dancers perform in a consistent order as if they were dancing the Konami Code or some other video game single button combo.

Now, in Real Life, en pointe is a very taxing technique that is not taught to anyone who is not 1) physically matured enough (including muscle development and bone ossification) and 2) thoroughly competent in ballet technique on the flat. Pointework is veritable murder on the toes, as can be seen when the pointe shoes come off.note Ballerinas' feet are frequently ugly as sin, and that's with toe spacers, toe pads, lambswool, band-aids, and athletic tape padding their shoes. While dancing en pointe can give a very floating impression, it cannot be used too much in choreography due to not only the strain and pain, but also the fact that such a small point of contact with the floor does not offer enough leverage for some moves. Also the fabric covering the shoe might shred up mid-act and look simply unbecoming.note More seriously, professional dancers can go through five or six pairs of pointe shoes a week, and often will use a new pair for every performance. This is because pointe shoes break down with repeated use, giving the dancer less support and increasing the risk of injury. Worn-out pointe shoes don't just look ugly; they're actually dangerous.

Expect fictional ballerinas to dance en pointe how ever much they please, at any age and stage of training they please. They will transition to and from any and all movements gracefully on their tip-toes, and they will never have to tape and pad their black and blue toes for the shoes.