Literature / The Tales of Alvin Maker 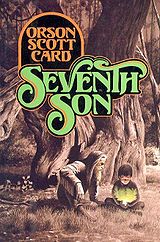 A series of Fantasy/Alternate History books written by Orson Scott Card, set a little bit after the American Revolutionary War, in a world where supernatural powers are a fact of life. In Spite of a Nail, however, history hasn't really diverged that much. There is a still a United States of America growing and racism still grows up in the South. However, this USA is much smaller, since the lower half of the Eastern Seaboard is the Crown Colonies, the government in exile of the House of Stuart. Up north is New England, still a colony of a republican England where the Restoration never occurred, and utterly opposed to "witchery", even though supernatural powers are very much real in this world. Meanwhile, out West, a mountain-based rebel group led by Tom Jefferson fights to keep the independent state of Appalachee free from the Crown.

Race and culture play a huge part in the story. The slavery of Blacks is still going on in the South, and there is a deep-seated, mutual distrust and hatred between the Reds and Whites. Representative of these differences is how the supernatural powers manifest themselves across the cultures. Whites have a knack, a single skill that they can perform perfectly (such as making a perfect barrel, or being able to tell when people are lying). The Reds live in perfect harmony with nature, and can communicate (albeit vaguely) with the land and animals through the "Greensong"; Reds can also use their blood to perform particular powerful bits of magic (especially the Mexica Reds, who sacrifice their still-living enemies). Finally, the Blacks use a form of voodoo magic, mixing earth and bits of their flesh or body to perform very powerful magic (such as when one black woman makes a poppet of herself with wings and burns it, sacrificing her life in order to grow wings and carry her child out of slavery). It's not clear how much of these abilities are nurture and how much are nature, since some characters can learn other people's knacks or other cultures abilities.

Born into all this is Alvin Miller (later Alvin Smith, and eventually Alvin Maker), a seventh-son-of-a-seventh-son and Expy of Joseph Smith (founder of the Mormon Church), a young child with tremendous powers, destined to be a Maker, the first one for almost two thousand years. Able to bend metal, heal cancer, and many other abilities, he desires to learn how to control his abilities and help the world, aided by Peggy Larner, a girl with the ability to see people's thoughts, past, and future. Their primary goal is to build the Crystal City, a mysterious city of Makers shown to Alvin in a vision.

after one of the key locations in the Alvin Maker series. The indie pop duo The Scene Aesthetic are also apparently big fans of the series, as they included a song titled "Alvin Maker's Greensong" on their 2007 self-titled album.