Literature / Tales of Dunk and Egg 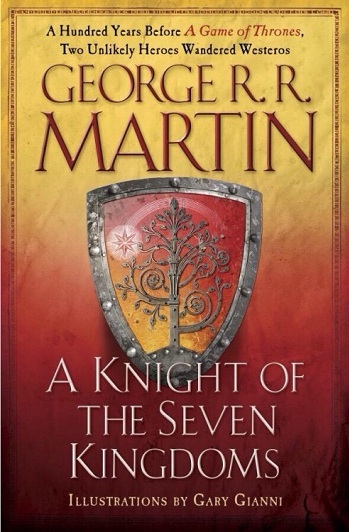 Dunk the Lunk, Thick as a Castle Wall
"This man protected the weak, as every true knight must. Let the gods determine if he was right or wrong."
— Baelor Breakspear
Advertisement:

Tales of Dunk and Egg is a series of novellas written by George R. R. Martin. It takes place in the same universe and continuity of A Song of Ice and Fire but is set nearly a century before the events of the main series. It features a completely different set of characters and events, some of which were only alluded to as Noodle Incident or Great Offscreen War in the main text but which are explored in fuller detail here.

After burying his mentor Ser Arlan of Pennytree on a meadow beneath a tree, Dunk of Flea Bottom decides to take up the calling of knighthood himself and enters as a poor hedge knight, styled Ser Duncan the Tall, in the Tourney at Ashford. On his travels he comes across a small, curious, bald child called Egg who volunteers to be his squire. Their random meeting leads to a lifelong friendship and several adventures, great and small, as they trudge across Westeros.

The published novellas include:

A fourth novella tentatively titled The She-Wolves of Winterfell was announced but has since been put on hold in favour of completing The Winds of Winter. Martin has announced his plans to publish several future tales, with the stated intention to chronicle the complete adventures of Dunk and Egg. Martin publicly stated that his to-do list involves finishing Winds, She-Wolves, A Dream of Spring, a fifth novella in this series, and a second volume of Fire and Blood — in that order.

The series has led to two well received graphic novel adaptations of The Hedge Knight (2004) and The Sworn Sword (2008) written and drawn by Ben Avery and Mike S. Miller and published by Dark Horse Comics and Marvel Comics respectively. An adaptation for The Mystery Knight will finally be released in 2017's fourth of July

, this time published by Random House in a single graphic novel edition. In October 2015, a collected edition of the first three tales was published under the title of A Knight of the Seven Kingdoms with illustrations by Gary Gianni.

Dunk and Egg differs from the main series by being significantly different in tone. The values of knighthood, the codes of chivalry and the honor of friendship, deconstructed in the main series, are here mostly played straight. It's mainly a chronicle of perhaps the most unlikely friendship in the annals of Westeros.

open/close all folders
General
1. "The Hedge Knight"
Dunk of Flea Bottom, the squire of the late hedge knight Ser Arlan of Pennytree, takes up his master's mantle and enters the tourney at Ashford as a newly minted knight. On his journey to Ashford, he meets Egg, a curiously bald-headed boy who volunteers his service as a squire.
2. "The Sworn Sword"
Dunk and Egg have entered into service as sworn swords of Ser Eustace Osgrey of Standfast. A grievance over water rights has embroiled Ser Eustace into a feud with his neighbor, the rich and vindictive Lady Webber of Coldmoat. It's up to Dunk and Egg to resolve the dispute before it escalates into bloodshed.
3. "The Mystery Knight"
Dunk and Egg attend Lord Ambrose Butterwell's Tourney in celebration of Butterwell's wedding to a daughter of Lord Frey. Dunk decides to enter the tourney as a "mystery knight," but Egg realizes that there's more at stake than a simple prize, and they quickly find hints of a conspiracy.