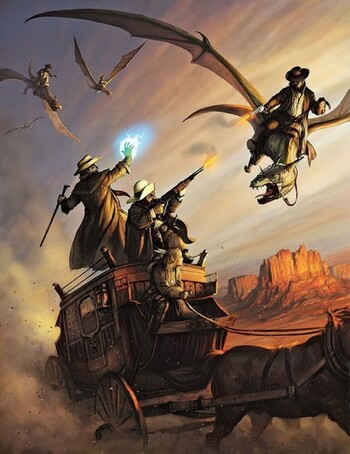 The wilderness of North America (especially the United States) makes for an effective fantasy setting. Its huge swaths of uninhabited land might contain all manner of strange and terrible creatures, or robbers and bandits, ready to prey on unsuspecting travelers. Ancient ruins lie scattered about the landscape, built by a people long gone, and out beyond the bounds of civilization, the average Muggle works the land, having either no ability or no desire to confront the dangers that lurk in the wilderness just beyond the treeline.

And though this might sound a lot like a Standard Fantasy Setting, there are a number of traits that set Fantasy Americana apart. Rather than villages built around a castle or keep, you're more likely to find isolated homesteads or quaint small towns. If there are castles, they probably look more like wooden frontier forts. Magical Native Americans replace wizards, oracles, and elves, and Fearsome Critters of American Folklore and cryptids like Bigfoot or Mothman take the place of classical creatures like dragons or unicorns. And in place of the towering figures of Classical Mythology or Knights in Shining Armor, there are Tall Tale folk heroes like Paul Bunyan, John Henry, Davy Crockett, and Johnny Appleseed, some of whom really existed.

Fantasy Americana can even take place in modern times, with the weirdness and supernatural stuff happening alongside modern technology and culture, because there are still enormous areas of America where virtually no one lives. And even if people do live there, they are often several hours' travel from civilization. The disconnect between rural and urban America is often a prominent theme in modern Fantasy Americana.

See also: Lovecraft Country, Sinister Southwest, and Southern Gothic, which use specific slices of Americana as the backdrop for horror instead of fantasy, though the two can overlap. Compare Salem Is Witch Country and Roswell That Ends Well, which similarly have America as the setting for unusual goings-on but utilize more local legends (witches and aliens, respectively).