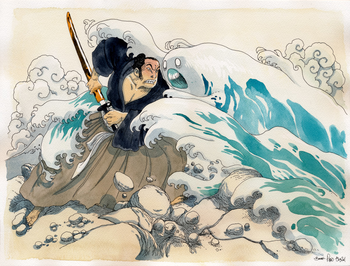 When Hazardous Water indirectly trying to kill you isn't good enough, it's time to take this to the extreme: The water itself has somehow developed a mind of its own. Current desire? Kill the meatbags.

For obvious reasons, actual water trying to murder someone is a little unlikely, so a common workaround is that the water is being possessed or manipulated by a malevolent force — in which case, the only way to stop it is by taking out whoever is doing the controlling. (This doesn't always mean killing them; sometimes the heroes can reach an agreement, such as doing a favor or request in return for stopping the water's deadly rampage.)