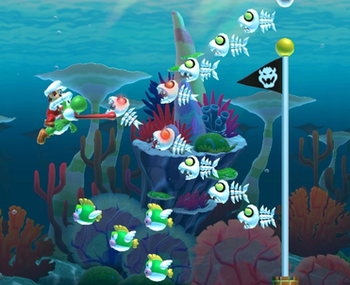 Your basic Mook, now for aquatic environments. They generally come in two types: an enemy specifically designed for aquatic levels, typically based on marine animals, and regular land-dwelling mooks repurposed for a new environment by being equipped with scuba gear (masks and air tanks), becoming more fish-like, or the like. This second option most commonly occurs with the Mascot Mook. Regardless of type, you'll definitely encounter them Under the Sea, Down the Drain and even in the Bubblegloop Swamp.

If it is an underwater level, then the hero is also given swimming skills so they can face these mooks as if they were on land; the difficulty in this case is that the jumping on head option is usually taken away, making it impossible to avoid Collision Damage (and forcing you to just avoid these guys) unless some other weapon is given. The other option (when on land) is that these guys jump in and out of water where they are unapproachable because of the hero's Super Drowning Skills, so you have to hit them while they are out of it (if they can be damaged, that is). Some games (like Super Mario Bros.) may have the same enemy show up in both roles, others will have different ones for the two environments.

Compare Gas Mask Mooks, similarly suited for unfriendly environments, and Airborne Mook for mooks that take to the sky instead of the sea.

Cheep Cheeps are fish enemies that come out of the water.

Cheep Cheeps are fish enemies that come out of the water.