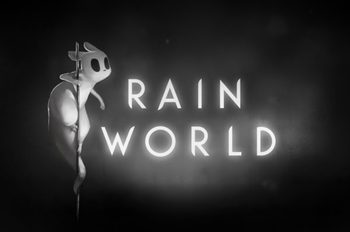 A cute little protagonist for a brutal game.
Advertisement:

Rain World is a 2017 survival platformer developed since 2011 by Videocult and published on Steam by Adult Swim for PC, PS4 and Linux. It's set in an abandoned industrial environment ravaged by a shattered ecosystem.

Bone-crushingly intense rains pound the surface, making life as we know it almost impossible. The creatures in this world hibernate most of the time, but in the few brief dry periods they go out in search of food.

You are a nomadic slugcat, both predator and prey in this land. You must hunt enough food to survive another cycle of hibernation. Other — bigger — creatures have the same plan. The goal of the game is to reunite with your family.

Gameplay can be described as a Cinematic Platform Game with Survival Horror elements in a Metroidvania style map. The main gimmick is the ecosystem of the world, which is highly reactive and nonscripted. For starters, the game is segmented into "dry seasons" when the titular rain stops, forcing the player to return to shelter with enough food in stock to properly hibernate and survive. In addition, the game is further divided up into nonlinear "regions" rather than one cohesive map. To move forward, the player must accumulate enough "Karma" by successfully surviving regions enough times, and in doing so can move on.