What Fate a Slugcat...
A small quadruped animal that looks like... well, a cat with an elongated body, making it look like a slug. The white slugcat you play is the game's "normal" difficulty begins the game as part of a tribe, but gets caught up in the rains of the environment and gets sucked away from his/her/it's family. Two other are playable in single player if a different level of challenge is desired: the yellow, slower, but easier to handle Monk, and the red, stronger, but much more challenging Hunter.

Looks to the Moon 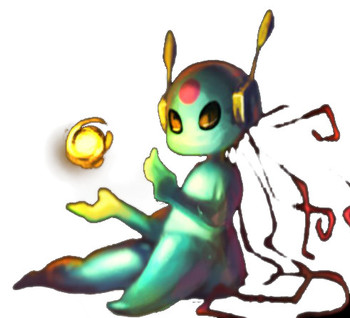 "Hello again, little creature."
An iterator stationed on the far west side of Shoreline. While she begins the game deactivated, the player can restore her somehow- if they know how. 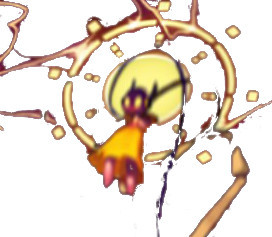 "I think I know what you are looking for..."
An iterator stationed inside the Five Pebbles facility that most of the game takes place on. More hostile than Looks to the Moon, but not enough to try and attack you right away.