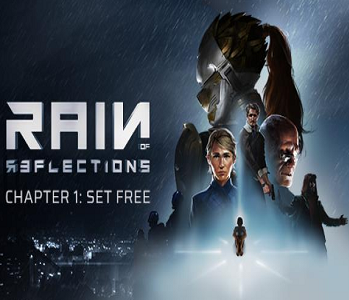 Rain of Reflections is an episodic Adventure Game, developed by Lionbite Games. Chapter 1 was released on PC through Steam on October 4th, 2019. It is quite comparable to Life Is Strange, with similar third-person movement, dialogues and item interactions, but it also features a lot of hacking and turn-based stealth encounters.

It is set in the world of early 22nd Century, when infertility has become the dominant problem facing humanity as the result of the general ecological collapse, which also led to the formation of a totalitarian one-world government. By the time the game rolls around, only one child has been born as a result of a natural pregnancy, who has spent her entire life observed in the labs as a result. Yet, Wilona Hart, a scientist and a daughter of one of the highest-ranking Ministers, decides she must aid the Infrared rebels and free the child regardless.