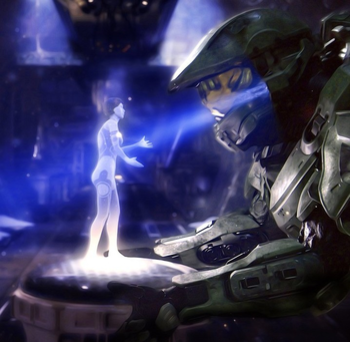 "A hologram is like a telegram.
You can send it anywhere.
But you never go nowhere.
You gotta realize your limitations
when you're just thin air."
—Cranky Kong (The Hologram Song), Donkey Kong Country
Advertisement:

A staple of Speculative Fiction, Holograms can be created by technological, magical, or psychic means, but are always intangible illusions meant to fool onlookers into seeing something that isn't there. Holograms are thus the preferred tool of The Trickster and more specifically the Master of Illusion.

Holograms have a variety of uses, among them being deception, creating a Holographic Terminal, a simulacrum of those long dead or artificial intelligences. The exact nature and properties of holograms vary between works, but for purposes of trope differentiation and practicality, the one unifying trait they share is intangibility. If they do have substance, they're Hard Light.

What media commonly identifies as a hologram is not actually a hologram,

it's a volumetric display.

Actual holograms are 3D images on 2D surfaces, and not visible from arbitrary angles. While this may seem like picking nits, there are perfectly valid reasons for the practice: "hologram" is easier to say than "volumetric display," and would the BBC allow Rimmer to walk around with "VD" plastered on his forehead?

Among their possible traits are:

Tropes that can overlap are Kiss Me, I'm Virtual, Virtual Training Simulation, and Artificial Outdoors Display. There are five subtropes, which may or may not overlap with each other.

When Rose is sent back home by the Doctor, a holographic message plays telling her that he is likely dead and what to do when she returns to Earth.

When Rose is sent back home by the Doctor, a holographic message plays telling her that he is likely dead and what to do when she returns to Earth.