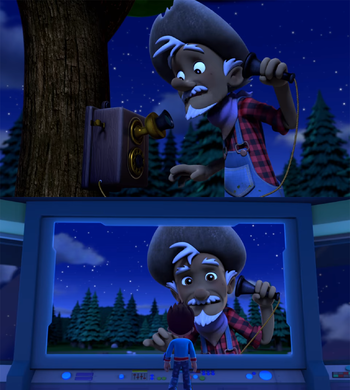 It even works on old-timey phones without any screens!
Archer switched the screen back to normal view so Mayweather could see where the hell they were going.
— Farce Contact, a Star Trek: Enterprise parody
Advertisement:

Whenever a character talks to another over a Video Phone, each is able to see the other party on his monitor, but no camera of any sort is shown. Both parties will look directly at the screen showing their conversation partner on the other end, but neither party will appear to be breaking eye contact with their partner by doing so. This suggests that the actual screen one is looking at (or something directly behind it) is also recording one's own end of a conversation, which is viewable on their partner's monitor.

This trope can be exaggerated by displaying the characters actually holding the device he is using to chat (as seen in the image above). This would require a non-existent third person camera to be setup In-Universe.

Becoming a Discredited Trope as video calls become commonplace and are no longer futuristic technology, so a typical viewer expects that video transmissions require a camera to capture the image.