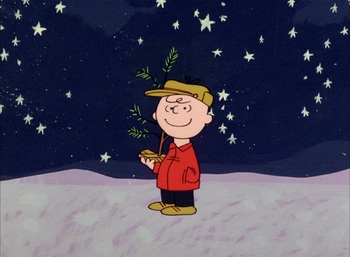 This is not just a Christmas Special. This is the Christmas special.

While Mr. Magoo's Christmas Carol predated it by three years, and Rudolph the Red-Nosed Reindeer by one, it was really A Charlie Brown Christmas that made TV Christmas specials a thing in the entire Western world. The first of the animated prime-time specials based on Charles M. Schulz's classic comic strip Peanuts, made on the cheap-and-quick by producer Lee Mendelson for CBS in 1965,note a careful viewer will notice that it's rife with animation errors due to its rushed production A Charlie Brown Christmas has nevertheless gone on to become one of the most iconic Christmas works of all time. It is also one of the most successful of all time, enjoying a prominent place in pop culture from its debut to the present day. In fact, if you're from a Christmas-celebrating household, chances are you have already watched this special more times than you can count, and we don't have to remind you about the plot. But, just on the off chance that you haven't seen it...

Butt-Monkey protagonist Charlie Brown is having a rather cheerless holiday season. He's received no Christmas cards, and he feels no particular seasonal joy. Lucy manages to rope him into directing the school Christmas pageant, but after his first attempt falls flat, she gives him a new assignment: to pick the show's Christmas tree. She wants something aluminum and painted pink, but instead he brings back a twiggy sapling that's too tiny to even support the weight of a single ornament — though it is a real tree — and returns to mockery and scorn. Despairing, he asks aloud whether Christmas has any deeper meaning at all. By way of answer, Linus recites the Nativity story from Luke 2 and seemingly reminds everyone that the humble things are what should matter. With "a little love", Charlie Brown's sad little tree becomes transfigured, and his spirits are restored.

Yes, that's the whole plot. And yes, the animation by Bill Meléndez and crew is equally as sparse, as is the musical score by jazz pianist Vince Guaraldi and his trio.

And yet... there's a reason this 26-minute cartoon aired on network TV each and every December for 50+ years, originally on CBS and then on ABC. For whatever reason, the special just clicked with audiences in a way nothing else had before, and very few Christmas works have since. The special's perennial appeal is so strong that when ABC started editing it for time in order to accommodate more commercials, fans raised such a stink that the network agreed to broadcast it uncut in an hour-long timeslot with a new segment, Charlie Brown's Christmas Tales, being commissioned to fill out the remaining time.note  Of course, the fact that the network could then sell twice as many commercial spots with a consistently popular rerun was appealing as well. In 2020 it appeared that such concern for accommodating commercials would no longer be relevant, as it was announced the special would be available for streaming on Apple TV+ along with other animated adaptations of the Peanuts franchise. It was later announced that PBS as well as the 24/7 PBS Kids channel would be airing the special as part of a last-minute deal between Apple and PBS. The special aired again on PBS in 2021, but will not do so in 2022.

This humble television special that no one had any faith in – CBS was fully-prepared to disown it and only aired it out of legal obligation – went on to win an Emmy Award and ended up turning Peanuts into a multimedia juggernaut.note CBS quickly changed their tune when the ratings came in; literally half of America watched this special. For reference, the only other things on American TV to earn that high an audience share are the Super Bowl (sometimes), and the final episode of M*A*S*H. Over the next four decades, Peanuts would get several dozen more specials, a Saturday Morning Cartoon that ran for two seasons, four theatrical films,note Plus a CGI adaptation years later from Blue Sky Studios and two Broadway musicals.note Each of which was given a Recursive Adaptation as a TV special. It effectively is the gold standard for all subsequent Christmas specials in any medium, and it single-handedly exterminated both the use of a Laugh Track in animated comedy and the popularity of tacky painted metal Christmas trees. In 2015, ABC aired a two-hour special called It's Your 50th Christmas, Charlie Brown, which focuses on the enduring popularity of A Charlie Brown Christmas.

"...That's what Christmas is all about, Charlie Brown."
Feedback

The Peanuts Do the Endless Loop

Makes you want to get up and do that, doesn't it?

Example of:
Everybody Do the Endless Loop

The Peanuts Do the Endless Loop

Makes you want to get up and do that, doesn't it?