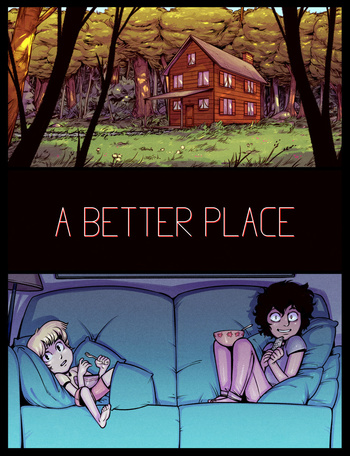 On the left is Theo and on the right is his sister Hannah.
"Sure, you could lock away some bad guys- or beat up someone evil- but you'll see, when you get older, that most of the bad things are around because nobody can agree on how to make them better! Starvation, war, even boredom, it's all because nobody can agree on how to fix things."
—Hannah
A BETTER PLACE is a webcomic by the author of Demon's Mirror.
Advertisement:

A pair of young siblings, Hannah and her younger brother Theo, accidentally summon a demon through "blood* Theo cuts himself on some thorns, fire* Hannah burning ants with a magnifying glass, and sacrifice* The ants that she burned" while on an adventure in the woods, which grants each of them one wish.

Fast forward a hundred years, and Hannah has become the new god of Earth, although she clearly never grew up mentally. The world has been rewritten with the rules of a fantasy RPG, populated by robots. After she reveals an absurd plan to attach enormous rocket engines to the Earth to turn it into a giant spaceship, her advisor Ninabell is forced to seek out Theo to be the one person that God Empress Hannah will listen to. Meanwhile, the Anti-Theists would like to overthrow Hannah and make Theo their new god; the mysterious rabbit Mr. Bun is collecting mysterious artifacts from each city, each guarded by insanely powerful "wards" of Hannah's direct creation; and Hannah's closest advisor Empress Computer would like to run the world herself so that Hannah need not worry about those trivialities.

Can be found on Tapastic

. Its first page is here