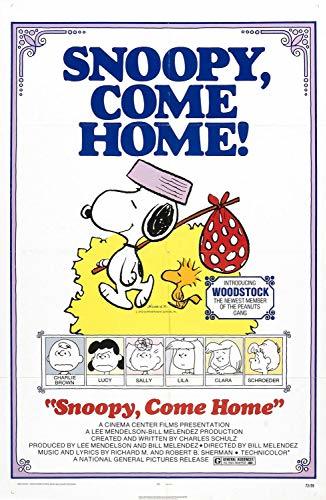 Linus: You bought Snoopy in the month of October, right? According to the records at the Daisy Hill Puppy Farm, Snoopy was bought by another family in August. This family had a little girl named Lila. Snoopy and Lila loved each other very much, but then they moved, and the family decided they just couldn't keep Snoopy so they returned him. (Beat) You got a used dog, Charlie Brown.
Charlie Brown: (Faints in Shock)
Advertisement:

Snoopy, Come Home is a 1972 animated film directed by Bill Meléndez. It is the second of the five feature-length films based on the Peanuts comic strip by Charles M. Schulz. Whereas the previous film, A Boy Named Charlie Brown, focused on Charlie Brown, this one focuses almost entirely on Snoopy.

It is also, unquestionably, the most depressing and heart-wrenching thing in the Peanuts franchise. If there was a trope called "Crowning Moment of Tearjerking", this film would win fairly easily. (This was possibly due to Schulz having just gone through a depressing divorce, and deciding to take it out here.)

To summarize: The plot begins with Snoopy experiencing dissatisfaction with his life amongst the other characters, as numerous "NO DOGS ALLOOOOOOOOOOWED" signs have recently been put up around the town, resulting in Snoopy being kicked out of most public places. After this, Snoopy attempts to get the attention of Charlie Brown and the other kids, only to be rejected or shrugged off in one way or another.

Snoopy then receives a letter from his original owner, Lila, with whom he only spent two months as a puppy before he was sent back to the Daisy Hill Puppy Farm because Lila's family moved. The letter informs Snoopy that Lila is in the hospital and wishes to see Snoopy again. Snoopy and Woodstock immediately leave town to visit her without explaining. They go on a somewhat surreal journey across the country and engage in silent shenanigans.

Meanwhile, Charlie Brown spirals into a extreme depression (even for him) at Snoopy running away, and any attempts at his friends to cheer him up fail. If anything, he in the Charliest of Browniest fashions manages to simply make everyone depressed as they all blame themselves for Snoopy running away.

Snoopy and Woodstock eventually make it to Lila's side where they help her recover, only to have Lila ask if Snoopy wants to stay with her permanently. Feeling obligated, Snoopy returns home to inform everyone that he is leaving to live with Lila permanently, essentially massacring what little self-esteem Charlie Brown has in the process. This culminates in a going-away party in which the entire Peanuts cast (and the audience as well) ends up crying hysterically the entire time while Snoopy gives away all of his possessions. Charlie Brown sinks even deeper into depression afterwards.

Upon arriving at Lila's home, however, Snoopy finds out that not only does Lila already have a pet of her own in the form of a beloved cat, but that her apartment has a "No Dogs Allowed" policy. Freed of his obligations, Snoopy joyfully runs back home and into the arms of Charlie Brown and company who welcome him back joyfully. The happiness lasts for a few minutes until he gets a swelled head and demand that they give back all the things he gave them before moving or he'll sue them, upon which everyone but Charlie Brown leaves Snoopy in disgustnote Lucy: "That does it, Charlie Brown! He's your dog and you're welcome to him!!" (though he does leave a few moments later in disgust as well when Snoopy has let Woodstock type in the ending credits).

A 1991 animated TV special, Snoopy's Reunion, provides a prequel story about Snoopy and Lila, while contradicting some details from Snoopy Come Home.

Example of:
No Animals Allowed