Hear Me the Money 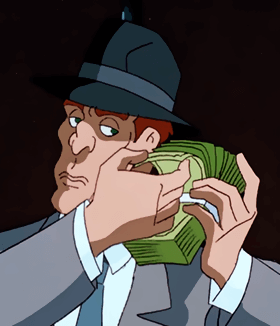 When receiving a payment, a character takes a stack of money (or a case of coins) to their ear and flips through it, to hear whether or not all the money they were promised was there.

Could be Justified: since the paper they print money on is special paper, the sound it makes while flipping might be different than counterfeit bills printed on regular paper. And with coins, various densities and shapes could also make different sounds. Modern coin collectors can sometimes be tipped off that a dime or quarter is one of the pre-1965 varieties made of silver, if it sounds different than normal when landing on a tabletop — silver will sound much more "bright" and vibrant compared to base metal alloys, and this sound has been referred to as the "ring of truth." This is also why many old mechanical cash registers had marble shelves above the cash drawer. Gave an easy place to test the sound of the coins.