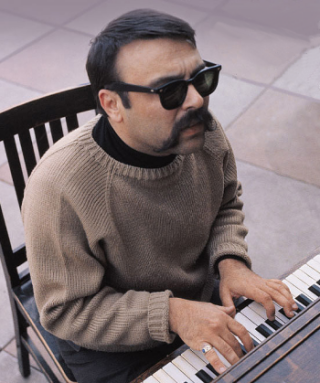 The man, his keys, and his 'stache.
Influences:
Vincent Anthony Guaraldi (July 17, 1928 – February 6, 1976) was an Italian-American jazz pianist and composer.
Advertisement:

A self-proclaimed "reformed boogie-woogie player", Guaraldi was a mainstay of the post-war West Coast jazz scene and a lifelong San Franciscan. Guaraldi cultivated his own idiosyncratic style of impressionistic jazz working as a sideman for notable names such as Cal Tjader, Stan Getz, and Woody Herman. A heavily stylistic improvisational "ear player", Guaraldi's trademarks include his deep, hypnotic bass lines, and rapid-fire soloing; born with stubby fingers that didn't naturally lend themselves to the piano, Guaraldi's quirks were largely born of necessity rather than intent. After a number of attempts at striking out on his own—having recorded albums incorporating a diversity of musical styles—Guaraldi scored an unlikely hit with the 1962 single B-side "Cast Your Fate to Wind", eventually winning a Grammy for Best Original Jazz Composition. The fact that he first grew his mustache around the same time that he Growing the Beard is, as far as we know, purely coincidental.

It was "Fate" that would bring Guaraldi to the attention of television producer Lee Mendelson, who in 1963 had been hired to create a documentary based on the life and works of Charles M. Schulz, creator of the world-famous comic strip Peanuts. The light and breezy Bossa Nova-inflected jazz style Guaraldi had pioneered proved an unlikely fit for Charlie Brown and friends, and although the documentary failed to get off the ground, Guaraldi was kept on hire for Mendelson's next big project: A Charlie Brown Christmas. Though the special suffered from an infamously Troubled Production, one song Guaraldi had written for the project—first played live over the phone to Mendelson—was a little ditty known as "Linus and Lucy", which would become the Bootstrapped Theme of the Peanuts specials, and by association, one of the most universally recognizable pieces of instrumental music in history. Mendelson and the production crew's resolve was galvanized by the upbeat energy of Guaraldi's music, and against all odds, A Charlie Brown Christmas made it to air in 1965, and has remained a timeless Christmas staple ever since. Another of Guaraldi's compositions for the special, "Christmas Time Is Here", featured a marriage of major and minor keys that perfectly mirrored the mixed emotions that Charlie Brown—and countless others—have for the season. The accompanying soundtrack album—largely viewed as Guaraldi's best—has become an iconic part of the Christmas music canon. With over four million copies sold in the last half-century, it's not only one of the most popular Christmas albums in history, but it ranks behind only Kind of Blue by Miles Davis on the list of the all-time best-selling Jazz albums. A further testament to its enduring popularity is that, for the 2020 and 2021 holiday seasons, the album made the Top 10 on the Billboard Album Chart (not the Christmas Album chart, the main album chart), while 2021 also saw Guaraldi return to the Top 40 nearly six decades after "Cast Your Fate to the Wind" when "Linus and Lucy" cracked the chart.

Guaraldi would continue putting the swing in Charlie Brown's step to the lastnote Literally; on the last day of his life, he completed the score for It's Arbor Day, Charlie Brown, becoming progressively more experimental and adventurous with his compositional work—incorporating new technology such as electric pianos and synthesizers as they became available—though always remaining within the framework of the established Peanuts style, even as he flirted with the realms of funk and classical. He would occasionally even make the odd vocal turn, notably singing the themes for Snoopy's "Joe Cool" persona, as well as "Little Birdie", the soundtrack for Snoopy's epic battle with a recalcitrant folding chair. It was at Guaraldi's suggestion that, in lieu of actual voices, trombones would become the go-to vocalization method for adults in the animated Peanuts universe for decades. A key Peanuts collaborator for Guaraldi was arranger John Scott Trotter (a man not wholly unfamiliar with the seasonal idiom, we might add) who would largely handle score material not incorporating the piano. Guaraldi was notably absent from certain Peanuts productions such as Snoopy, Come Home and the two musicals; in the case of the former, Mendelson and Co. were pursuing a style informed by the aesthetics of Disney films of the time at Schulz's behest. Rather ironically, Guaraldi rarely if ever actually performed Beethoven fanatic Schroeder's renditions of old Ludwig Van's masterpieces, probably owing to the technical complexity of Beethoven's piano sonatas.

In 1976, Vince Guaraldi passed away from an undetermined cause of death between shows at Butterfield's nightclub in Menlo Park, California. The last song he ever performed was an interpretation of The Beatles' "Eleanor Rigby". Out of respect for his inimitable talent, the Peanuts production team made the conscientious decision to largely forego the classic "Guaraldi sound" in future specials for decades to come, until finally reincorporating it in the early '90s under the guiding hand of longtime Guaraldi champion David Benoit. The continuing outpour of love and respect for Guaraldi's work from the public and music historians alike grows for each passing year. For instance, when The Peanuts Movie was in production, the producers had to give public assurances that they would be using Guaraldi's compositions where appropriate. The breadth of influence Guaraldi's music has had on generations of young future jazz listeners is patently incalculable.

It's truly amazing how far you can get playing for Peanuts!