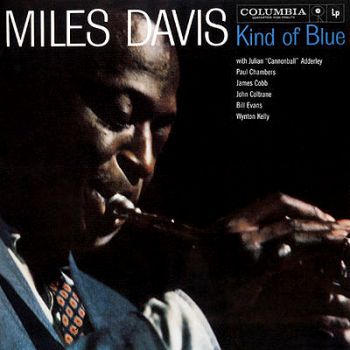 Kind of perfect.
That will always be my music, man. I play Kind of Blue every day - it's my orange juice. It still sounds like it was made yesterday.
—Quincy Jones
It's one thing to just play a tune, or play a program of music, but it's another thing to practically create a new language of music, which is what Kind of Blue did.
—Chick Corea
Advertisement:

Kind of Blue is Miles Davis' most famous and critically acclaimed album. Since its 1959 release, it has become the top selling jazz album of all time and influenced countless musicians, not only in jazz, but in all kinds of genres. In 2002, it was added to the National Recording Registry for its cultural, historical and aesthetic importance.

The 1997 CD reissue adds an alternate take of "Flamenco Sketches" (9:32) discovered on the master tapes by the engineers

as a bonus sixth track.