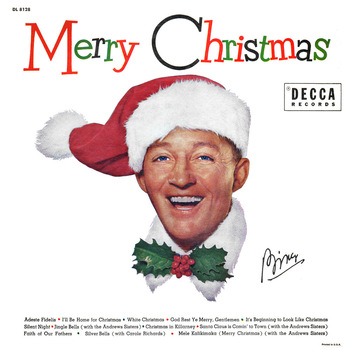 Merry Christmas is a 1945 album of Christmas Songs recorded by Bing Crosby, which has remained in print for over three quarters of a century now and is de facto the second-best-selling Christmas album of all time, behind only Elvis Presley's Elvis' Christmas Album (1957).

The album contains Crosby's Signature Song "White Christmas", in itself the best-selling musical single of all time and the Trope Namer for Dreaming of a White Christmas.

Originally released by Decca Records as a set of ten songs on five 78 rpm records, all of which had been previously issued separately. It was subsequently reissued with additional songs in 1947 (again as a set of 78s) and in 1955 (as an LP record). The latter version was reissued in the CD era as White Christmas, and is most commonly distributed under that title today.

I'm dreaming of the following tropes...