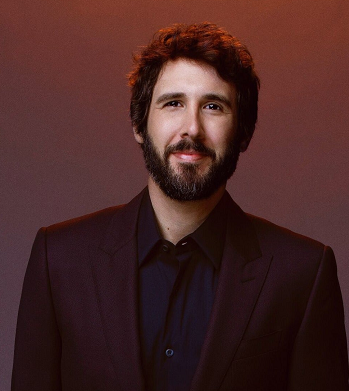 He is an angel sent from heaven to deliver platinum records unto us.
"Sons and daughters of England. I urge you not to purchase my record. Do something nice, make a card, buy a puppy for her. Chocolates, there are really so many things you can do to make your mother happy than buy a Josh Groban CD, so please, from Josh Groban... stay away."
—Josh Groban, Never Mind the Buzzcocks
Advertisement:

Joshua Winslow Groban (born February 27, 1981) is a singer, formerly famous for looking like a 15-year-old, and having the voice of a 300-pound, 50-year-old baritone. Now that he's in his 40s and has scruffed himself up a bit, he is largely now famous for the latter. He still has plenty of millennial fangirls, but the "Grobanites" are still seen as the grandmas of the aforementioned millennials.

Groban got his start thanks to a discovery by mega-producer David Foster, who is responsible for Whitney Houston, Céline Dion, and Groban's contemporary Michael Bublé. He got his start as a rehearsal stand-in; during the 1999 Grammy Awards, he subbed in for Andrea Bocelli, and was noticed by such personalities as Oprah Winfrey, Ellen DeGeneres, and Ally McBeal producer David E. Kelley. The Grammy rehearsal led to California governor Gray Davis hiring the 17-year-old to perform for his inauguration, as well as David E. Kelley hiring him for a two-episode role on Ally McBeal.

He was offered a record contract by Warner (Bros.) Records after the inaguration, and WB's PR team hatched a plan to promote him as a boy band–type singer. Groban decided to decline the contract after WB had him do a series of fairly embarrassing photos for promotional purposes; Foster then backed the teenage Groban up, giving him a contract with his own division of WB records, 143 Records. His debut was redone as a mix of pop and opera, a formula that has given him platinum records ever since. His more recent albums, Illuminations, All That Echoes and Bridges, have departed from the Classical/Singing-in-Romance-Languages style of his previous albums, moving into pop, folk, Americana, as well as other genres, while Stages is entirely showtune covers.

Along with Ally McBeal, Groban has done a number of TV performances. Notable examples show his sense of humor, including the 60th Emmy Awards, where he performed a love-it-or-hate-it medley of famous TV show themes. He also did the "Panda Sex Song" [1]

for Jimmy Kimmel, and the Tim and Eric Awesome Show, Great Job! for Adult Swim [4]

. He also parodied his own image on the Glee episode "Acafellas", making himself out to look like he Likes Older Women.

He is also famous for spearheading a revival of the musical Chess, appearing twice as protagonist Anatoly Sergievsky. The latest appearance was at the Royal Albert Hall, starring alongside Idina Menzel and Adam Pascal. He then went on to star in the Broadway debut of Natasha, Pierre, and the Great Comet of 1812 as Pierre in 2016.

He dated Mad Men's January Jones for three years, and has been (falsely) linked several times to "I Kissed A Girl" singer and friend Katy Perry.