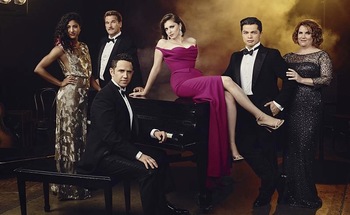 have their own theme songs.
Advertisement:

Crazy Ex-Girlfriend is a 2015-2019 musical dramedy, that aired on The CW, and starring Rachel Bloom (of "Fuck Me, Ray Bradbury

" fame), and created by Bloom and Aline Brosh McKenna (the writer of The Devil Wears Prada).

The show is about Rebecca Bunch (Bloom), a successful, overworking and severely depressed young real-estate lawyer in New York. On the verge of a major promotion and nervous breakdown, she happens to run into her old ex-boyfriend from summer camp and latches onto those childhood memories as the last time she was truly happy and carefree. She therefore decides to impulsively quit her job and move to West Covina, California in pursuit of a fresh start in life (and not coincidentally because her ex lives there). All while bursting into song.

Created originally for Showtime, the show moved to the CW with a few cast changes. It is known for its colorful characters, most of which share some sort of Ambiguous Disorder, and its catchy songs, most of which can be found on Rachel Bloom's YouTube page.

In February 2016, two soundtracks for the first

have been released. And there's one for season 2

Crazy Ex-Girlfriend has nothing to do with the Miranda Lambert song, by the way. If you're looking for the general trope of an actual crazy ex-girlfriend, then Psycho Ex-Girlfriend is what you want.

Season 4's theme song ends with the "other Rebecca" saying something weird, which changes every episode. (Credit for compilation: The Sacred Duck on Youtube)

Season 4's theme song ends with the "other Rebecca" saying something weird, which changes every episode. (Credit for compilation: The Sacred Duck on Youtube)