Martyr Without a Cause 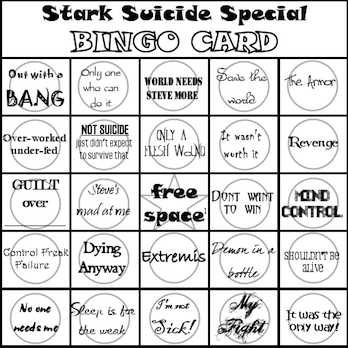 Why is Tony Stark sacrificing himself today, folks? We're taking all bets! note 1. I was sure my breastplate/cyborg heart had at least another hour's worth of power.
"You Optimuses do love to sacrifice yourselves, don't you?"
— Megatron, Beast Wars
Advertisement:

Heroes are heroic; it goes without saying. So it shouldn't come as a surprise when one makes a Heroic Sacrifice or takes the shot to protect a friend or loved one; even his allies might form a Hero Secret Service to protect him before facing the Big Bad.

Then, there's heroes who seem to have a near suicidal insistence on being the one to die... even if the situation isn't all that dire! They'll put the Overprotective Dad and Mama Bear to shame in their zeal to ensure no one around them but themselves is in any risk. They'll discourage alternate plans for a given threat if any friends have to be in the slightest danger, even if they increase the odds for success and their own survival, and said friends are willing to take the risk. If someone gets hurt (or his little sister forbid, dies) he'll be eaten up with guilt. This is often the Character Flaw of a Messianic Archetype, and often combines with Chronic Hero Syndrome.

Expect friends, family, and loved ones to scold him repeatedly on this risk-hogging behavior, and villains to use Flaw Exploitation to make the most of it by engineering threats. If it's that kind of show, expect an episode or two about how the hero needs to learn to trust his teammates, and realize he can't control fate and protect them from all harm.

Generally, this is also part of the motivation for why a hero will give themselves up without a fight when a love interest is held hostage at knifepoint and give said love interest up afterwards, to save them from any perceived danger.

Occasionally, such a character may be a member of a Martyrdom Culture for whom death is not necessarily a bad thing, potentially resulting in misunderstandings when dealing with those with different backgrounds.

See Honor Before Reason for the idea behind this trope, and compare Suicidal Pacifism. For the more depressing and less heroic version of this, see Death Seeker. Characters like this with combat skills may also be The Berserker. This may be the fate of a Small Steps Hero if they can't rescue an innocent without sacrificing themselves.

Compare Inspirational Martyr when they do have a clear cause. Also compare Senseless Sacrifice and Self-Punishment Over Failure.