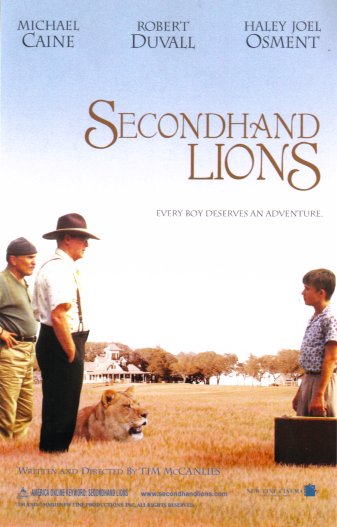 "Sometimes, the things that may or may not be true are the things a man needs to believe in the most. That people are basically good; that honor, courage and virtue mean everything... that good always triumphs over evil; and I want you to remember this, that love... true love never dies."
— Hub McCann
Advertisement:

In this 2003 film set in the 1960s, Walter (Haley Joel Osment) is dumped off on his great uncles by his ditzy mom Mae, who says she needs some time to herself so she can go to court reporting school. The uncles, Hub (Robert Duvall) and Garth (Michael Caine), don't like having a 'kid' around cramping their style, but eventually warm to him, and he to them. The uncles are a little... eccentric (they fish by shooting bass with their shotguns, and spend their days chasing off traveling salesmen... with their shotguns), but time proves them to be surprisingly capable foster dads. Walter is awed by Hub's crazy ways, while Garth spins tales of their adventuring days of yore. Are any of the stories true — including the one about the uncles sitting on a hidden stash of plundered wealth? And how did they afford to buy that lion?