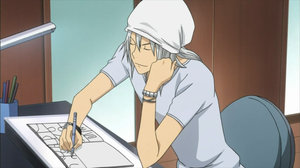 Most comic book artists draw comic books. As a result, it's a common occupation or hobby for characters in media. These characters are typically very Genre Savvy or Wrong Genre Savvy and possible Fourth Wall breaker. Most often they are aspiring Comic Artists / Mangaka who work on Comics / Doujin / Manga to sell at Fan Conventions. Sometimes these can take the form of an Author Avatar relating problems they had or have making their work. They tend to have a penchant for Cosplay generally as the characters in their own works, or works they're fans of.

In Japan they are more often Female and are often Yaoi Fan Girls. Males are far more common in the Western world thanks to the western idea that Comic Books are for boys.

A common Superpower for these characters is Art Initiates Life.