The Red Tornado is a DC Comics character, best known as "the robot member of the Justice League". His personal history, however, is a little more convoluted than that. 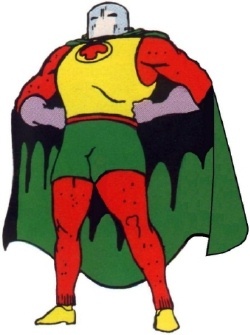 How can you confuse THIS...
Advertisement:

The Golden Age Red Tornado, from the 1940s, was actually a woman disguised as a male hero (she was pretty burly). She had no superpowers and was associated with (but not a member of) the Justice Society of America. Abigail "Ma" Hunkel was a hefty housewife who started out as a supporting character in Scribbly the Boy Cartoonist, but quickly overshadowed the title character when she donned her characteristic soup pot and longjohns to keep her neighborhood safe for her kids. She was both one of the first female superheroes and one of the first superhero parodies.

Hunkel first appeared in All-American Comics #3 (June, 1939), created by Sheldon Mayer. She assumed the Red Tornado identity in issue #20 (November, 1940). Her series ended in #59 (July, 1944). She had a minor crossover with the Justice Society in All-Star Comics #3 (Winter, 1940). After the end of her series, Hunkel remained a fond memory. She was given minor cameos in retro stories and crossovers, but was not seriously considered for revival until JSA #55 (February, 2004), where she was revealed to be still alive. Her long absence was explained with her having joined the Witness Protection Program back in 1950. Though now in her 80s and long past retired, she serves as the JSA's resident museum curator while looking after her granddaughter Maxine, the wind-powered superhero Cyclone. 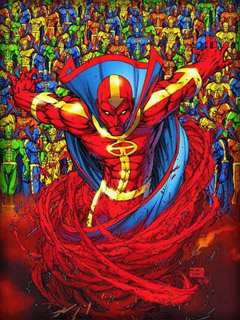 During the Silver Age, like many other DC characters, the Tornado was reinvented. This time, he was an android with wind-creating powers. This version first appeared in Justice League of America #64-65 (August-September, 1968). The two parter was written by Gardner Fox and drawn by Dick Dillin.

The android was created by Mad Scientist T.O. Morrow to infiltrate the Justice Society and destroy it from within, pretending to be the original Red Tornado suffering from amnesia. Despite realizing that could not be true (because they knew the facts about the original Tornado- obviously Morrow didn't) the Society allowed him to join them. Eventually The Tornado discovers the truth and turns on his own creator, saving the Society and becoming a true hero.

Later, the Tornado joined the Justice League and gained his own secret identity ("John Smith"—he didn't have much imagination), a human girlfriend, and even adopted a little girl orphaned in a Middle Eastern war. Although often given a robotic personality in other mediums, the Tornado in the comics had human emotions and spoke normally, though he did angst about "not being human enough."

Tornado's origin got more complicated in the 1980s when a Justice League writer decided to reveal that Tornado was actually Ulthoon, the Tornado Tyrant of Raan, an Air Elemental enemy of the League from the 60s who had taken refuge in the android's body while it was being made, only to gain amnesia in the process. For a while, Tornado abandoned his robot body and became Darker and Edgier as a living storm, but has recently returned to his humanoid body and role as a hero.

He also spent some time as the "adult mentor" of Young Justice. The series spotlighted his relationship with his daughter, and really fleshed him out. One of his defining moments came when YJ's first foe, an omnipotent wish-granting being, returned and was about to destroy all life. Red Tornado pleaded with the being to make -him- human, too, so that he could die along with his friends and loved ones. The being granted Tornado his wish, and observed how the now human embraced his wife and daughter before facing the end. This touched emotions in the omnipotent being that it had never felt before, and it wondered the eternal question "oh, what it must mean to be human"... and inadvertently turned itself into a depowered, harmless newborn human. The lack of Ontological Inertia reverted Tornado into a robot. He eventually had to defend his right to retain his guardianship of his adopted his daughter due to his legal status as a machine (which was all part of The Plan to destabilize the entire super-hero population of the DCU). While it's true that he lost the case and ended up in a jail cell, some readers had never found themselves rooting so hard for a tertiary character before or since.

A new version of Red Tornado has since appeared in the New 52 continuity as part of the Earth 2 series. In keeping with the series' emphasis on diversity, the new Red Tornado is a Gynoid rather than a masculine Android. In issue 17 of Earth 2, she has the late Lois Lane's consciousness uploaded into her body, bringing Lois back to life in a manner of speaking.

Reddy has starred in two limited series. The first, in 1985, was written by Kurt Busiek and revealed the aforementioned twist that the Red Tornado was actually an elemental in a robotic body. The second, in 2009, was by Kevin VanHook and introduced his three robotic "siblings"—Red Torpedo, Red Volcano, and Red Inferno. Reddy has not, to date, starred in an ongoing series.

The Red Tornado appeared in animated form as a member of the Justice League Unlimited, in some episodes of Batman: The Brave and the Bold and as a recurring character in Young Justice - the cartoon, that is, in addition to the comic. He also appears in one episode of Justice League Action thus far, "Captain Bamboozle". An apparently nonsentient version of the character, being used by a villain, appears in a first season episode of Supergirl, while an alternate version appeared during the Crisis on Earth-X crossover event.