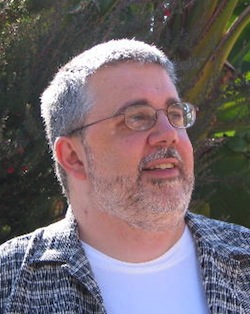 Kurt Busiek (born September 16, 1960) is an American Comic Book writer noted for seamlessly blending Silver Age sensibilities with modern storytelling expectations, all while deconstructing and reconstructing various storytelling tropes along the way. He is arguably most renowned for his work on the Marvels limited series and Thunderbolts, as well as his acclaimed run on The Avengers, (all three for Marvel Comics), and his own Kurt Busiek's Astro City. He is an unabashed fan of all comic books, and has a knowledge of canon and character history that borders on uncanny.
Advertisement:

He is a regular collaborator with artist Alex Ross, who will often paint covers — or entire issues — of Busiek's work. In junior high school he made friends with Scott McCloud, creator of Zot! and Understanding Comics, and Scott has stated that it was Busiek who first got him interested in comics.

He also has a page on Formspring, located here

Works created or heavily influenced by Kurt Busiek include: