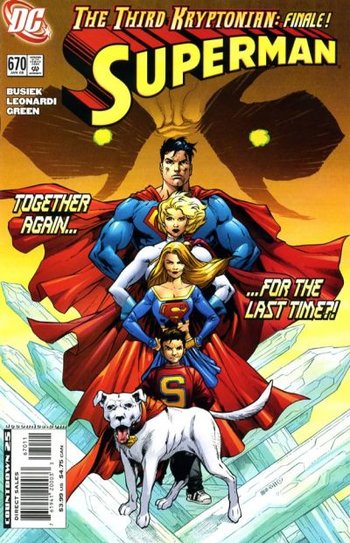 A third Kryptonian. He— or she— could be lost, alone, in need of help. Or a deadly threat to Earth. We had to know. And aside from that, I wanted to know. Another survivor of my long-shattered home. Like me, like Kara…
— Superman
Advertisement:

The Third Kryptonian was a 2007 Superman storyline, published in Superman (Volume 1) #668-670 and chronologically set during Last Son. Plotted by Kurt Busiek and illustrated by Rick Leonardi, this storyline tells the final fate of the alien ghetto of Kandor, a subplot which had been going on without apparent resolution since 1995, and clears the decks for the return of the real Kryptonian Bottle City in the pages of Superman: Brainiac.

Superman has been told there is an unknown Kryptonian hiding in Earth. Determined to find that person and ascertain whether they are friend or foe and their reasons for hiding, the Man of Steel starts a planet-wide search with help of Batman in order to find the missing Kryptonian.

Meanwhile, the news of Kryptonians living in Earth have reached the ears of someone who has vowed to kill each and every survivor… and is willing to destroy Earth in order to achieve his goal.