Comic Book / The Coming of Atlas 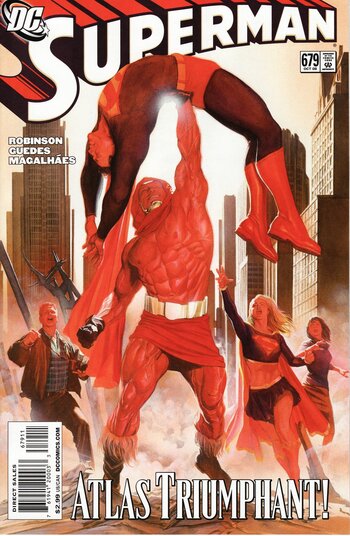 The Coming of Atlas by James Robinson and Renato Guedes is a 2008 Superman storyline published in Superman (Volume 1) 677-680. Together with Superman: Brainiac, it worked as a prelude to the New Krypton mega-event.

Superman is enjoying his downtime when a man named Atlas suddenly shows up in Metropolis and starts tearing the city up. After quickly disposing of the unfortunate members of the Science Police who tried to stop him, Atlas loudly demands a duel with Superman.

Superman engages Atlas as soon as he notices the chaos, but he finds himself losing ground. Atlas is a powerful, vicious warrior... and something is messing up with his powers.

And while both super-beings fight, the same person who set up their battle is watching them from the shadows and studying the Man of Steel closely, in hopes of finding a way to destroy him.

This comic-book provides examples of the next tropes: