This Is Something He's Got to Do Himself 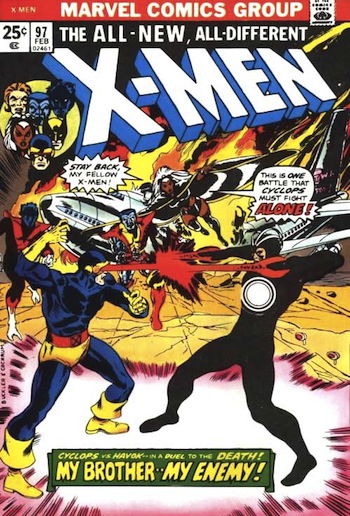 "I can save [Blow]'s life. However, at the same time that is a deed that will stain the hoodlum's pride. It's up to each person which one to choose, but I choose to take pride. Even if the hoodlum dies as a result."
— Shiraori, So I'm a Spider, So What?
Advertisement:

Everything comes down to a one-on-one fight between the hero and whoever has been his worst antagonist in the current plot. The hero's friends and reinforcements show up in time to intervene and give the hero a decisive victory with their overwhelming numbers and/or firepower, but they don't — or the hero won't let them — because "This is something he's got to do himself."

This is the logical extension of It's Personal, the cousin of Leave Him to Me!. It often stems from Honor Before Reason, and may be invoked by The Atoner who feels responsible for cleaning up his own mess without dragging anybody else into it. Also see I Work Alone for refusing help from the beginning, Hero Harasses Helpers for actively pushing away would-be helpers, and The Only One for cases where nobody else can really help. There's also Locked Out of the Fight, where the hero does want help but circumstances contrive to prevent the helpers from helping. Compare Shoo Out the Clowns. Contrast In the End, You Are on Your Own, where the helpers can't be of any help even if they wanted to. See also What You Are in the Dark. Also contrast Figure It Out Yourself, where the bystanders could help, but don't, even if you ask, as well as I Can't Do This by Myself.

Contrast Helping Would Be Killstealing, for when it's a matter of experience and personal growth rather than honor or revenge. In video games, this tends to lead to a Duel Boss.

Sometimes the other heroes disagree with the hero who wants to go at it alone, so the Solo Mission Becomes Group Mission.

Unlike many examples of this trope, Obi-Wan actually literally can't interfere, rather than deciding to hold back for the sake of letting the hero learn a lesson or win on his own â as a Force spirit, he can't do anything to affect a lightsaber battle.

Alternative Title(s): This Is Something Shes Got To Do Herself, This Is His Fight, This Is Her Fight

Unlike many examples of this trope, Obi-Wan actually literally can't interfere, rather than deciding to hold back for the sake of letting the hero learn a lesson or win on his own â as a Force spirit, he can't do anything to affect a lightsaber battle.