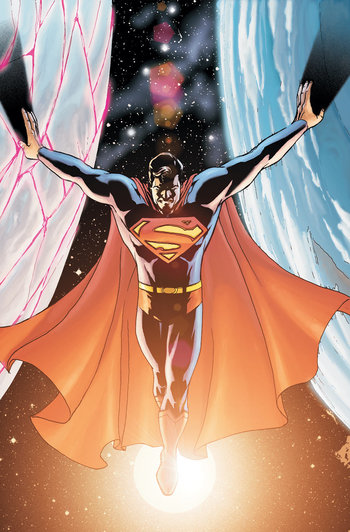 Superman: New Krypton is a DC Comics Bat Family Crossover for the Superman-related titles, running from 2008 to 2010. It was written by, at various points and on various books, Geoff Johns, James Robinson, Sterling Gates, and Greg Rucka.

The storyline comes directly on the heels of the Superman: Brainiac arc, but has roots in the Last Son story by Geoff Johns and Superman director Richard Donner.

Continuing from the end of Brainiac the story revolves around the Bottle City of Kandor becoming just the City of Kandor, having been finally unshrunk, and its 100,000 inhabitants freed from captivity. The resulting chaos and mistrust stemming from thousands of beings as strong as Superman now existing on Earth culminates in the murder of Supergirl's father, Zor-El. His wife, Alura, believing that there is no place for her people on Earth, encases the city in a protective dome and launches it into space, using Kryptonian technology to form the planet "New Krypton" on the other side of the solar system. All Kryptonians except Superman are banned from Earth and Alura releases General Zod to head up the defense of their people. On Earth, Sam Lane, the father of Lois Lane, reappears, having previously faked his death to go underground and prepare for a day when humanity might need to oppose Superman.

From there, each title in the series goes in its own direction within the overall arc:

The story arcs Superman: Grounded and Supergirl: Bizarrogirl depict Superman and Supergirl dealing with the fallout.