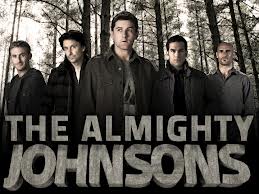 The Almighty Johnsons is a 2011 New Zealand Urban Fantasy Dramedy about a family of four Kiwi brothers and their Cloud Cuckoolander cousin—who all happen to be incarnations of Norse gods.

The story revolves around Axl Johnson (Emmett Couling Skilton), a typical university student who has just turned 21 years old—an event which triggers weird signs all over Auckland. Upon turning 21, his brothers tell him that he and his brothers are reincarnated Norse Gods, although their powers have diminished over the years. It takes a lightning bolt to make him realize the truth about his godhood, and he discovers that he is the physical incarnation of the god Odin. After a rival goddess shoots an arrow which nearly pierces his heart, fulfilling the prophecy that proves he is Odin, his older brother Mike (Timothy Balme) tells him about his quest: In order to get all their powers back, Axl (Odin) has to find his soulmate, Frigg, and seal the deal. If he doesn't find her before he dies, his whole family dies with him. However, several goddesses have united to prevent him from finding Frigg, including the one who tried to kill him earlier.

The quest involves several Red Herrings, including a netballer, a librarian, a homely daughter to a god, and even a goddess. Although the show revolves around Axl's quest, it also gives character development to the other brothers, especially Ty and Mike, who refuses to use his god powers because of an incident which left his best friend in a coma.

Created by South Pacific Pictures, the makers of the long-running soap opera Shortland Street and hit show Outrageous Fortune, with the assistance of New Zealand On Air, The Almighty Johnsons is the latest product of star writers like James Griffin and Rachel Lang. Originally intended for one season, the first season's success led to the airing of a second season and a scheduled third season, which began filming on 14 January 2013. Many established Kiwi actors have participated in the show, most notably Keisha Castle-Hughes as Axl's flatmate and Ship Tease Gaia, and Timothy Balme (Mike).

Has a Character Sheet