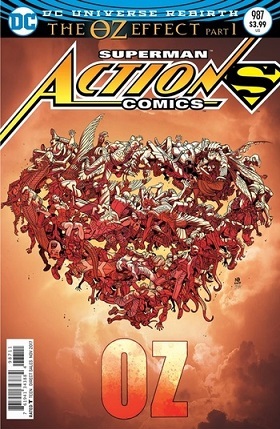 "The Oz Effect" is a five-issue story arc that was published in October and November 2017 in the pages of Action Comics, written by longtime Superman writer Dan Jurgens under the DC Rebirth saga. It served as the climax of Superman's conflict with the mysterious Mr. Oz.

Ever since his introduction in the last phase of the New 52, Oz has been stalking Superman and his family for an unknown purpose. Oz is aware of every crucial moment in Superman's life, even his cosmic rebirth in the new DC Universe, and has been kidnapping people from across the world to keep his own involvement hidden, including Tim Drake, Doomsday and the new villain Prophecy. Now, Oz's identity and plans stand revealed, forcing Superman to confront everything he believes in to stop him.

The Oz Effect contains examples of: