Fight Off the Kryptonite 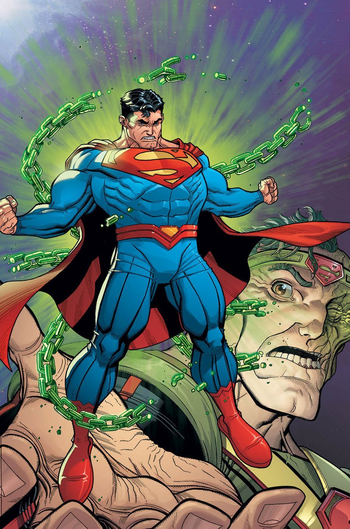 Buyer beware — if you have someone in the palm of your hand, they're in a perfect position to break your fingers if they can get moving again.
The stronger a hero, the more likely he is to have a Kryptonite Factor to "balance it out" that varies in abundance, lethality, and embarrassment potential. Still, a hero isn't just a set of powers and handicaps, but a character with substance and grit and not just some jerk with powers. So when authors want to show off just how badass the character is they do so by having him Fight Off The Kryptonite.
Advertisement:

The character, usually surrounded by Kryptonite and severely weakened, in a lot of pain, and sometimes already badly injured, uses Heroic Willpower to work through the pain and proceed to save his own or his friends' lives, and kick the ass of the Smug Snake who thought they could just wave a rock in his face and win. This is a tough trope to use correctly: if overdone or used too often then the dramatic purpose of a Kryptonite Factor is lost. Hence, in extreme cases, this precipitates a case of Heroic RRoD and ultimately a Heroic Sacrifice as the punishment his body has endured kills him. Or not.

Compare Brought Down to Normal, where the hero has to fight with no powers, but is not otherwise in pain. Contrast Cross-Melting Aura, where an evil creature can repel holy items that would otherwise weaken it. See also Kryptonite-Proof Suit, for other means of resisting Kryptonite.

To avoid excessive overlap with Heroic Willpower, all examples must be of characters with a potentially deadly or disabling Kryptonite Factor.