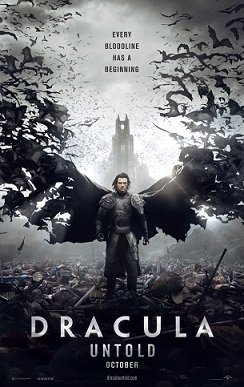 Dracula Untold is a 2014 British-American Dark Fantasy Action Horror film directed by Gary Shore and written by Matt Sazama and Burk Sharpless, released by Universal Studios. The film explores the origins of the legendary Count Dracula (Luke Evans), weaving vampire mythology with the true history of Prince Vlad the Impaler, depicting Dracula as a flawed hero in a tragic love story set in a dark age of magic and war.

After production on the film finished, its ending was reshot to tie into the Dark Universe, a planned Shared Universe of the classic Universal Monsters in the spirit of the Marvel Cinematic Universe, but the film was ultimately removed from continuity. Instead, the first (and last) film of that setting ended up being The Mummy.

Vlad tears through the thousand-strong army attacking him.

Vlad tears through the thousand-strong army attacking him.