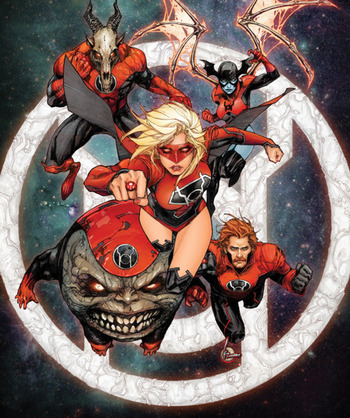 "She's done with people pushing her around, taking advantage of her, and betraying her. She's done feeling helpless, lost and discarded. She's done with hope, faith and acceptance. Now, all that's left is rage."
Dad. Kal. H'el. Siobhan. They ALL let me down. They all broke my heart. And now THIS. No more. Nobody gets away with hurting me ever again. Not THIS time!
— Supergirl a few moments before getting her Red Ring
Advertisement:

A short while after the events of H'el on Earth and Krypton Returns, Supergirl picks a fight with Lobo in the research facility known as "The Block". Realizing he can't go toe-to-toe with a Kryptonian, Lobo does everything he can to push her buttons and to make her so irrationally angry that she can't fight effectively.

However, Kara has been having a very hard time since she arrived on the planet. She's only fifteen and she's already lost her home... twice. Her homeworld is gone, her parents and all her friends are dead, her relationship with her only living relative is strained, she doesn't manage to fit into Earth, and apparently everyone she meets wants to decide what is better for her, use her or betray her after earning her trust. She's confused, heartbroken, and above all very, very angry. So, Lobo's taunting uncorks a volcano of rage in her that acts like a magnet to one of the new red power rings created by Atrocitus.

From that point on, Kara gets tangled up in the Lantern Corps wars, and she has to learn several harsh truths about herself in order to grow as a person.

open/close all folders
A - F
G - L
M - R
Advertisement:
S - Z
Supergirl: My mind is free of all the rage and confusion now. I know who I am, and I know what you are — a mockery of life. This is not murder. It is the end of a terrible mistake.