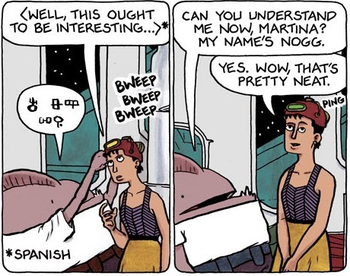 Rose: The aliens... they all speak English.
Ninth Doctor: No, you just hear English. It's a gift of the TARDIS. Telepathic field. Gets inside your brain. Translates.
— Doctor Who, "The End of the World"
Advertisement:

Also known as a "Universal Translator", this is a special kind of Applied Phlebotinum or magic that automatically translates communication from the speaker's language into the listener's, thus removing those pesky "Language Barriers" from between people of different countries, times, species or planets. In some fantasy works this ability will be gifted by a magical character, while in others the magic takes its course without anyone's help. If it's a human character who gets the ability to hear what animals are saying, it might result in the former saying You Can Talk? or something along those lines. Often happens with Animorphism.

It is commonly used to Hand Wave the appearance of Aliens Speaking English, by implying that the aliens are actually speaking in their native tongue and their words are being automatically translated for the (in-universe) characters' benefit. This is distinct from a Translation Convention, where the aliens appear to be speaking English solely for the audience's benefit.

We must, of course, assume that said microbes work either by imparting the ability to speak a common language (in which case, the characters are using translator microbes, but the audience is really experiencing the Translation Convention) or that the microbes substantially alter the listener's perceptions. The question of why the characters' lip movements appear to match the translated dialogue rather than the original is one that producers usually make far less effort to address, but the microbes may well cover for that as well, or it may be an extreme example of the McGurk Effect

, where perception of lip movements is influenced by the accompanying sounds. There is still a bit of Willing Suspension of Disbelief at work here, since it would be ridiculously hard from a production standpoint to film English-speaking actors and have them move their lips in a fake language, just to redub the same actors' voices in English at the end anyway.

This trope not only predates television, it predates most literature. One example is The Gift of Tongues given to the Apostles at Pentecost in Acts of the Apostles. After the Holy Spirit comes to them, they address a large crowd drawn from many different nations, and everybody hears them speaking their own tongues. The members of the crowd are astonished that the people doing this are all Galileans (normally assumed to be uneducated rustics).

Almost all Trapped in Another World stories will postulate that Translator Microbes are part of the magical nature of this other world. No justification is required or expected, although it's often good to have some kind of Hand Wave to point out that it's not "realistic".

A well-done page on this is here.

Translator microbes have a tendency to break down when faced with alien cuss words, and may sometimes give up when faced with a Starfish Language. It is rare for them to state that their transport is overloaded with Anguilliformes.

See also Aliens Speaking English and Common Tongue. Compare Bilingual Dialogue. See also Inexplicable Language Fluency, for when a character understands a language upon hearing it for the first time, Omniglot, when a character can do this by training or super power, and Ventriloquist Animal, for when talking animals don't appear to be talking.