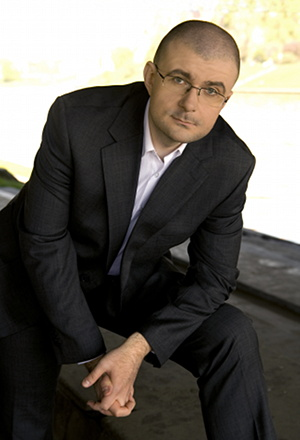 Jacek Dukaj (born 30 July 1974) is a Polish novelist, mainly associated with Science Fiction genre. His works explore philosophical themes by building vast, complicated fictional worlds based on certain worldviews (e.g. the philosophy of Aristotle). This results in each of his books being nothing like previous ones, as physical, political, social and linguistic aspects of the world change with each work. Like Stanisław Lem (who is often cited as one of Dukaj's inspirations), he frequently invents new words to describe beings and ideas from different realities. His books are notable for overwhelming the reader with many unexplained concepts and neologisms, thus presenting the fictional world as a riddle to solve. Dukaj's favourite topics include space exploration, aliens, transhumanism, parallel worlds, alternate history, cybernetics, virtual realities and scientific progress.
Advertisement:

His protagonists often struggle with their identity, typically (but not universally) starting as weak or broken, but slowly gaining strength and rising as powerful leaders, sometimes reaching A God Am I status. Many of them are or become Transhuman.

Dukaj’s works are yet to be fully translated into English (as of 2015, The Old Axolotl is his only novel published in both Polish and English), but if you’re curious, you can read more here