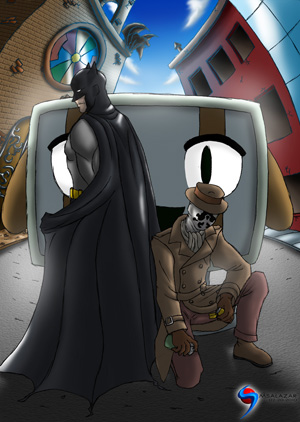 In a nutshell.
"So many people from so many worlds, all wanting to go home..."
— Razputin, Played by Firock Finion, Season One
"Damn, it's like watching a Saturday morning cartoon on acid!"
— Two-Bit, Played by Roman Myth, Season Two
Advertisement:

The Massive Multi-Fandom RPG is a Forum RPG notable for reviving the TV Tropes Forum roleplayer section. The "first season" was started in 2009 by Mint Pearl Voice, but once she disappeared, GM duties were taken over by tropers Nyktös, Te Chameleon, Theoneknownasme, Kaze Koichi, Demovere, and a number of GMs led by Doctor Thunder. The basic plotline was that various characters from alternate dimensions were pulled into a place known simply as "The City", with no way to get back. A gigantic Hourglass dominated the center of the City, and as the days went on, the characters were put through strange scenarios, such as having their ages changed or being forced to burst out into song at random intervals.

Season Two carries a similar premise, with one of the major differences being that the Hourglass is replaced with a really bad pun in the form of a (literal) Xanatos Roulette that doesn't stop spinning. The third and final installment in the trilogy takes place in Extremus, a mysterious composite land located at the edge of The Multiverse.

While Season Three ended rather abruptly, a continuation called "At Intervals" or "Season 3.5" was started later in an effort to wrap up the plot. Unfortunately, it hasn't received new posts since August 2014 and while the roleplay has not been officially closed, it appears to be all but dead for good.

On a more meta level: in the opinion of several of its GM's, it's a case study of how not to run a forum RP. The general tone of the plotline got steadily darker and darker from the goofiness in the first season, the players obligated to post longer and longer walls of text, until eventually apathy overran the whole thing and it collapsed into a pile of GMs realizing a forum RP was really not the right format for the kind of story they wanted to tell.

Has Character pages for Season 1, Season 2, and Season 3, as well as a Recap page.