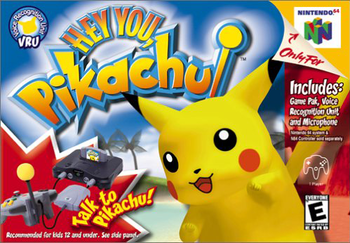 Where are we off to today, Pikachu?
Advertisement:

Hey You, Pikachu! is a virtual pet Pokémon game developed by Ambrella (their debut title) for the Nintendo 64 where you befriend a wild Pikachu. Using Professor Oak's new human-to-Pokémon translation device, the Poké Helper, you guide Pikachu as he goes on adventures and plays with his Pokémon friends. Most of the game play consists of saying short phrases to Pikachu via a microphone.

It is also made of the cotton candy from your childhood, and began a small subseries of Pokémon games geared for small children that involve Pikachu running around acting all cute. It was succeeded by Pokémon Channel and PokéPark Wii.

Your game was saved.
You can now turn the power OFF.