As this is a Recap page, expect spoilers. 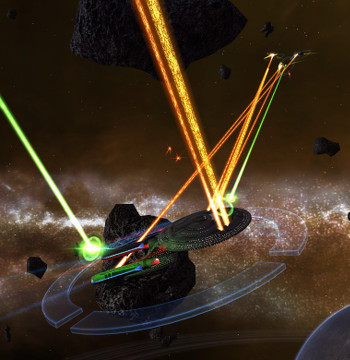 is a Star Trek Online Foundry mission series by StarSwordC. The first chapter went live on September 29, 2013 and is playable by Federation characters of any level. StarSword is also writing a novelization

, Bait and Switch, starring his Fed toon Kanril Eleya, published in chapter form on the STO forums and Fan Fiction Dot Net. A trailer for part one, made by aleniskendra from the STO forums, can be viewed here

"Bait and Switch" uses an atypical style that fuses the typical STO mission with prose character dialogs, something like a Visual Novel.

Things are getting worse in Beta Ursae Sector Block so Admiral Marconi sends a request to Starfleet Command for additional patrol ships. Command sends the Player Character. On their first patrol, they blow up some Jem'Hadar and rescue a freighter, but then Marconi pulls them off their route to investigate a garbled message from the Bajoran colony world Dreon VII. They find that the Orion Syndicate has attacked the colony and multiple other lightly-defended planets across the sector, killing or kidnapping almost a hundred of the inhabitants in this case.

Starfleet Command dispatches the Marduk Carrier Battle Group under Admiral Amnell Kree to respond and try and track down the kidnapped civilians from all across the sector, and reassigns the Player Character to Kree's command. With the help of a Section 31 operative with an inside source, the battle group quickly locates an Orion base in the Badlands and launches an assault. They destroy a large fleet of Orion warships and board the station, but unfortunately most of the 10,000+ kidnappees had already been transshipped. The mission ends with Kree telling the Player Character they'll call them back when they learn something useful.